In a recent decision from 1 October 2018 (B-2740-17) the Danish Eastern High Court affirmed a decision of the Danish Commercial Court from December 2017 (V-8-17) in which the court had ruled that a café in Copenhagen had infringed the trademark rights and copyrights to the character Obelix which rightfully belongs to Les Editions Albert René S.A.R.L (Albert René). The café was named Café Obelix and the interior of the café was decorated with numerous illustrations from the universe of the ‘Asterix’ comic book series.

Many people across the world are familiar with Obelix, a beloved character in the French comic book series ‘Asterix’, who fell into a cauldron of magic potion as a baby and as a result is in a permanent state of superhuman strength.

However to many Copenhageners Obelix is also known as the name of the café in the Vesterbro area which had been serving Copenhageners since the early nineties and which was featuring an ‘Asterix’ theme with decorations and illustrations referring to the ‘Asterix’ universe: 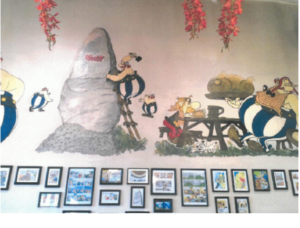 The publisher Albert René, has since 1969 published the ‘Asterix’ comic book in Denmark and is the holder of several registered trademarks in Denmark for the wordmark OBELIX registered in 1981 as well as a figurative mark registered in 1985 respectively. Since 1989 the registrations also covered ‘provision of food and drink’ in class 43:

The courts found that the use requirements for the EU trademark had been fulfilled in relation to class 43 by the use in connection to the theme park ‘Parc Asterix’ in France and for the Danish trademark by a license agreement with a Danish restaurant, from which it followed that the restaurant was allowed to use the names and the characters from the ‘Asterix’ universe in connection with a specific kids’ menu for a period of 5 month.

Even though the ‘Café Obelix’ was known in the Copenhagen area and had been subject to quite substantial publicity in its almost 20 years of existence, some even nationwide, the Danish courts nevertheless found that the lack of any enforcement actions against the café over that extensive period of time was not such passive behaviour on the part of Albert Réne as to constitute estoppel under the Danish Trademark Act, Article 9. See also the previous blogs regarding estoppel in Denmark.

In that finding the courts put particular emphasis on the predominantly local nature of the use of ‘Obelix’ by the café and that even though Albert René by a systematic surveillance of the Danish market, from France, could have been aware of that use, the nature of the infringement was such that it could not lead to a loss of rights. The courts also emphasised that there had to be some element of bad faith since the owner of the café could not have been unaware of the fact that there was a rights holder in regard to the name and illustrations of ‘Obelix’.

In addition to the trademark infringement the courts also established that the use of the various illustrations of the fictional characters of the ‘Asterix’ universe constituted an infringement of Albert René’s copyrights. Amongst other things the courts put emphasis on the inappropriate nature of some of the illustrations which included alcohol and sexual acts which the courts considered offensive to the artistic repute of the creator.

These decisions appear particularly interesting with regard to the interpretation of estoppel under Danish law, as it shows that the (for example indecent) nature of the infringement itself plays an important role in favour of leniency of the requirements for enforcement actions on the part of the IP-rights holder.